For this academic year 2018-2019, the PHINMA Foundation, Inc. awarded 31 new scholarship grants under its flagship program the PHINMA National Scholarship (PNS). These new scholars were welcomed by the PHINMA employees and executives during the Annual Banquet last September 25, 2018.

New scholars with the executives and employees of PHINMA

During the Annual Banquet, PNS also recognized this year’s Making Lives Better Awardee, Ramil Chua, from the Philippine Normal University. This award is given to a recent graduate who has demonstrated a strong commitment towards nation-building and is an exemplar of the PHINMA core values of Integrity, Competence, Professionalism, and Patriotism.

Ramil is currently a Teacher Fellow of Teach for the Philippines in Malaban Elementary School, Laguna. As a scholar, Ramil was very diligent with his studies and was recognized an FSTEM Laurel Awardee by the Math and Science Department. He has led many initiatives on campus and in the PNS Program as well. In his speech, Ramil reminded the new scholars that one way of showing their commitment to making lives better for others is to study well and include others in their goals and aspirations. 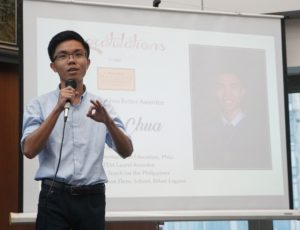